Maria Mogane, Martina Makua, and Simon Mokgalwane model two of their official T-shirts, part of a 4-piece sports outfit given to each.

This past November, two of our gogos and one mkhulu were chosen to represent all of Thaba Chweu municipality, which includes Sabie and several other surrounding towns, to attend the Golden Games (Seniors) in Port Elizabeth. I wanted a photo of the group but Maria wasn’t there – she was home with her 40-something son who’s had a good job the past 25 years, but has become “mentally ill” (her words) in the past four months. If someone doesn’t stay with him he will wander the streets and get lost.

So Martina, Simon and I walked to her house. Maria was mopping the cement floor with her year old granddaughter wrapped on her back. Her daughter, the child’s mother, was at work. They all beamed, recounting the 1300 km bus trip to the south coast, enabling them to see much of the country. The women raved about staying in a hotel for five days (“they cook for us, make our beds, clean our rooms!”). They received team jackets, T-shirts, track pants and running shoes. They were elated about seeing the ocean for the first time ever (“and swimming, too”). Imagine a comparable once-in-a-lifetime experience for you, what would it be?

Just to clarify, this was a government funded event and we Cdn. grannies can take no direct credit, but . . . these three were the only representatives from Thaba Chweu, and they all are part of Sitabogogo. I’d like to think it has something to do with renewed zest for life and feeling up to challenges. 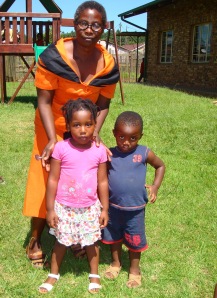 Martina, by the way, is the grandmother of the baby, Mimi, seen on the back of Ainah, our poster Gogo used on our pamphlets. Mimi goes to the crèche directly across the street, so here is a photo of her now at age four with her crèche teacher – and some star-struck little boy who would not listen to the teacher trying to shoo him away from a photo op (next generation’s Eddie Murphy?)