This is the third of a four part series written for the Vernon Morning Star newspaper during a trip to Sabie in Jan – Feb, 2008.

The steep path is muddy from a morning shower and I descend precariously. It leads to a spartan plaster house, the tin roof held down with rocks. Behind the house is Eva Magagula, sitting on a tree stump, with 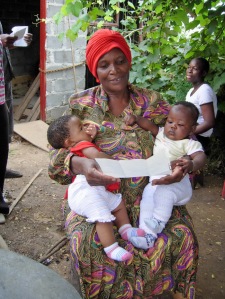 Eva Magagula in Sabie, South Africa, with two granddaughters on her lap, reads a letter from her Vernon partner Sherlyn Stewart, a member of Grannies à Gogo: the Vernon South Africa Connection.

two baby granddaughters in her lap as we arrive unannounced. The laundry flaps on a line overhead as if trying to do its best to fan her in the muggy heat.

Ruth Magagula (no relation to Eva, above) is the coordinator of the Sitabogogo Project, which is Zulu for “Help a Grandmother”, in Sabie, South Africa. During my three week visit here one of the activities I’m thrilled to do is to hand-deliver letters to fifteen of these gogos (grandmothers) who have been corresponding with Vernon members of Grannies à Gogo. It is a chance to meet them in their personal environment and learn more than their simply written letters reveal – the state of their health, the various circumstances each lives in, whether they have lost adult children and are raising orphaned grandchildren.

Their individual personalities shine through. Eva hugs me in gratitude when I hand her Sherlyn Stewart’s letter, then quickly arranges her granddaughters on her lap with the letter held between them for a photo. Lizah is so excited she dances dramatically in syncopated rhythm with foot stamping and sharp kicks, waving her letter from Kathy Pratt overhead.

Throughout each emotional meeting Ruth acts as interpreter. However, Tom Chiloane – yes, there are a few grandfathers involved, too – reads aloud in careful English his letter from Sigrid-Ann Thors, and I catch part of it on video tape to show her once I’m home. 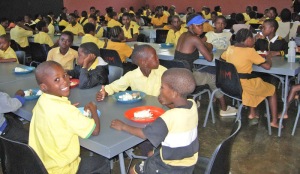 More than 300 orphans come twice a day to the Masiba Mbane Orphan Feeding Project in the rural community of Sabie, South Africa. Many of them live with their elderly grandmothers who are unable to provide adequate food.

I head over a few blocks to Masiba Mbane Orphan Feeding Project to see what has transpired since I first visited a year ago. The children begin to arrive and over the next half hour about 300 children (there were 220 a year ago) eat chicken stew and meillie pap. It’s cooked by 10 almost-volunteer women, many impoverished themselves, who also prepare breakfast for 7 a.m. The government now pays them 500 rands ($70) per month for 200 hours work. A number of these vulnerable children live with their gogos or with kind hearted neighbours or in child-headed households.

That night Beverley Barling and I have dinner with Danya Davis, a young Canadian woman who, for the past three years, has coordinated an HIV/AIDS education program for the 4,000 workers of the local sawmills. Danya says HIV and death from AIDS infections in still on the increase in this area and they are not winning on the prevention side. Their extensive testing revealed a 30% infection rate in the local population. She and her African nurse partner managed to get a successful anti-retroviral program in place a year ago by liaising with a U.S. company. Only in the last few months has the South African government finally started dispensing ARV’s in Sabie. Despite the enjoyable dinner, we leave subdued by these disturbing facts.

On another blistering day I follow Ruth through the pot-holed streets to a little community garden which a dozen gogos have made. This was the first organized project they created eight months ago with funds raised by Grannies à Gogo. They bought gardening tools, seeds and, ultimately, wire fencing to keep thieving chickens from devouring their flourishing crops. Trenches divide the space into individual plots. Each gogo stands beaming in her section awaiting a photo op and tells me eagerly of their first crops harvested – spinach, beets, cabbage, onions, carrots. They will get three crop rotations per year and have recently planted beans and tomatoes, among others.

I walk back to the Centre, wilting in the heat but blooming with the sense of future promise. The place is a hubbub with Beverley’s group sewing up a storm, the knitters clacking slippers onto their needles, the baking ladies making scones for all, and lively chatter everywhere. Miriam Sedibe hands me a letter she has just written to take back to her partner, Rhondda Ransom. We are all forging connections.