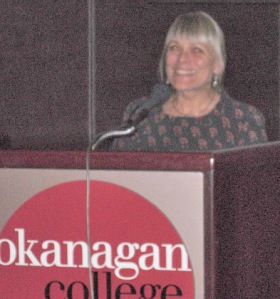 Just three months after their first tentative living room meeting, Grannies à Gogo: the Vernon  South Africa Connection was ready to officially launch in style. They opened with about twenty members of Ann Dorval’s African Drumming Circle setting the tone at Okanagan College Lecture Hall, Kalamalka Campus. In the lobby was a display of blown up photos of the group’s project, Sitabogogo, in Sabie, South Africa. There was a sell out audience of 222.

The main event was the screening of the new Canadian documentary film, The Great Granny Revolution by Rooney Film productions, which follows the story of the Wakefield, Quebec grannies and their partnership with the gogos they support in Johannesburg. Film maker Brenda Rooney, who is also a member of the Wakefield Grannies, was in attendance to answer questions afterward about this story of hope in the face of loss, and of the power of individuals to make a difference.

Although the evening was not intended as a fund raiser, when all was said and done we had collected $1,200 in our donation buckets. In addition, over 50 women in the audience signed up for our email updates, the real beginning of Grannies à Gogo.