Exercise day for the gogos happens once a week with the physio and occupational therapists from the hospital. As in every other year in January, these young ladies are new to Sabie – and to the gogos – because the medical system requires one year of practice in rural areas for graduates in all medically related fields. So they were prepared and pumped! 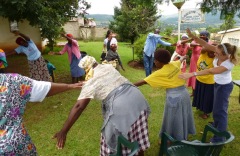 Physiotherapist Kate had all the gogos who could, out of their chairs, bending and stretching and shaking their booties. I did note that the gogos were rather more adept at bootie-shaking than the skinny white chicks. Karen challenged them further by calling out different gogos to take the lead and change the exercise. The man in the photo is Lucky Maabane who helps out intermittently, and he was acting as translator for the therapists … when they would pause long enough in their eager instructions!

They also had brought along some props to add variation. A large green ball was thrown across the circle from gogo to gogo, which gave their arms a workout. The ball hit the ground more that the receiving hands, and would seem to indicate a skill that needs continued working on. Three-foot long rubber tubing was used between pairs of gogos for several strength and stretching exercises. Another exercise involved passing a heavy soccer-sized ball around the circle with a twisting back & forth movement. Then things were ramped up a bit by adding another ball going the opposite direction – they got quite a giggle out of it. Next time they say they will add more balls going around the circle. 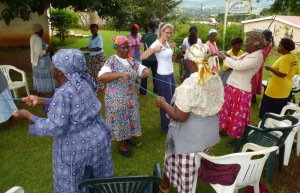 In pairs, gogos use rubber tubing to help each other strengthen muscles.

In a new twist, occupational therapist Lizelle did an interesting exercise of esteem and inclusion. She held on to the tail of a ball of wool, tossed it across the circle to a gogo and paid that gogo a compliment – something personal. Then that gogo wrapped the wool around her wrist and tossed it across to another, and said something positive about her. Etc, etc. At first the gogos’ comments focused on their physical dress or appearance, but Lizelle guided them to speak about their qualities, and soon they were noting characteristics such as hard working, patience, friendliness, and so on. It was quite a complex and difficult concept for the gogos but, credit to Lizelle, she persisted through to the end. She summed up by asking how they felt about hearing someone else give a compliment, and also pointed out the web of wool that was connecting all of us together. The symbolism of Ubuntu was clear to them. 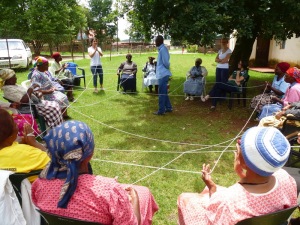