In the St. Augustine Church yard of Sabie, South Africa there’s a big tree that shades the members of Sitabogogo (“Help a grandmother”). They sit in plastic lawn chairs and focus on beading bracelets, knitting teddy bears, or hand sewing patchwork pieces. These are the gogos (Zulu for “grandmothers”) supported by Grannies à Gogo: the Vernon – South Africa Connection.

On my last two annual visits they’d had a thriving Ubuntu Centre. It was a municipality-owned hall which bustled with baking and handicraft projects, self-help meetings and song. It was surrounded by extensive veggie gardens, the proud product of the gogos’ back-breaking work. Having the Centre was a turning point in the lives of these African grandmothers whose adult children are dying of HIV/AIDS or other causes, and who are now raising orphaned grandchildren. The Centre brought them out of worrying isolation and helped them to bond.

But six months ago this changed. There was civil unrest, protests targeting the municipal council for lack of service delivery, for fraud and corruption. And what started as a peaceful protest got out of hand with a minority of the criminal element who burned down the municipal offices only eight feet away from the gogos’ Ubuntu Centre. They also burned the municipality’s fire truck, garbage collection truck, and several other vehicles. (Subsequently, when the provincial government learned the municipality’s coffers were, in fact, empty, all municipal directors were dismissed and are now under investigation.) 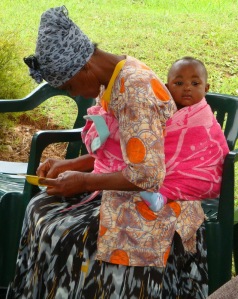 Without their Centre and large work tables, African grandmothers like Mandu, with granddaughter, sit outside and do small handwork such as beading, knitting and hand sewing, until the new Ubuntu Centre becomes a reality.

Later that same night the Ubuntu Centre was vandalized, but fortunately the gogos lost very little. They carried by hand all the contents of their hall to St. Augustine’s Anglican Church three blocks away where they have now temporarily set up. The gardens that they had put their backs into for two years were abandoned (due to water shut-off) after getting most of the last crop in. Gug, the professional gardener who was written up in the Morning Star last October, had successfully paid off the loan for his motorbike and has temporarily been let go. When we in Canada pledge to give compassionate support in a developing country, we sometimes learn there are unanticipated challenges. We need resolve to persevere.

The tone is more restrained than in my previous visits. The gogos are baffled, and healing their loss while they pull together. But make no mistake, these gogos are not ones to sit long nursing wounds. Under the visionary leadership of our volunteer administrator with Sitabogogo, Rev. Ginny Cormack, they have pulled together and set a new goal: to launch a major fundraising campaign to build a new Ubunbtu Centre on property donated by the Anglican diocese. ‘Ubuntu’ is a philosophy that approximates ‘humanity toward others’.

An architectural draftsman has been engaged and has presented a preliminary drawing. It shows a covered veranda which runs the full length of the building. Inside, in addition to the hall, is an office, meeting room, kitchen, bathrooms and a storage room. The plan is to use a steel pre-fab frame and when the roof goes on, the gogos can begin gathering there while the remainder of the construction continues. I’m tempted to reach for clichés of rising from the ashes, but a couple of incidents underscored for me that Sitabogogo has become, in its own right, a recognized presence in the community.

On the annual pension renewal day in the past, all the seniors had to walk five km downhill into town to jump through the necessary bureaucratic hoops and wade through the required paper blizzard of proving their existence. Then they would trudge back up again. But this year the civil servants came up to Sitabogogo in their township and set up their outdoor office under the tree for the lengthy process. The Mountain comes to Mohammed, I like to think.

In another example, this past November three members of the group were selected to represent the municipality as part of the province’s delegation to the Senior Games in Port Elizabeth. This is a national initiative by the government. Recently a representative from the Dept. of Arts and Culture dropped by, now that Sitabogogo is on his radar, to encourage them to get active again, because he wants to send an entire team of our gogos to represent the province in the next games.

In Part 2 I’ll look at some of the elderly who have become “orphans”, and the good news on the horizon for them.

Susan Fenner is a retired teacher who lived and volunteered in Sabie, South Africa from 2001 to 2005. Grannies à Gogo: the Vernon – South Africa Connection is available for 20 minute power-point presentations to interested groups. Visit their website at: http://www.granniesagogo.com

One thought on “Gogos Surmount Adversity Part 1 of 2”