Joy Burton took me to visit Nazareth Baby Crèche which I hadn’t seen in two years. A few years ago Emily Nonyane, a vulnerable gogo, approached Ginny for help, and Ginny encouraged her to start a home-based nursery. Emily takes in more the thirty little ones daily, around the clock to accommodate shift workers, and has a staff of five. Grannies à Gogo donates 25 kg of food per month for these infants.

When Joy and I arrived I noticed a number of improvements since my last visit – a fence had been built around the property (organized by Beverley Barling the year she visited), and lawn planted to facilitate outdoor play. A large room has been added on to the back of the house and this is where we found about 25 little ones and their care-givers. However, we were disappointed to see them all lying passively on mattresses spread around the perimeter of the very bleak room. No playthings in sight, nothing adorning the cement walls. Joy had told me earlier that, although toys have been donated, they are often not used because the caregivers say they cause squabbling. Joy made a point of asking. “Where are the toys?” and one of the ladies fetched a bagful and dumped it into the middle of the floor. The photos below tell the story of B.T (before toys) and A.T. (after toys). 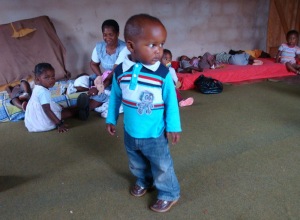 Within a few minutes the majority of them were up and interacting with the toys and each other. I’m concerned about the lack of stimulation for these little ones whose brains are like sponges from birth to age five, soaking up everything around them. My hope is that these ladies might be able to attend some training in early childhood education before long.

The Orphan Feeding Project is a visit I enjoy every year. Run very smoothly by Zodwa Mkhonto, it feeds about 300-350 orphans and vulnerable children twice daily in two locations. She has 15 volunteers putting in full days. 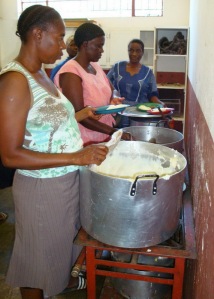 There are two arms to this project. Zodwa runs Masipa Kapisane (“Let us lift together”) and oversees everything to do with the feeding aspect. Bobby Duffett runs Masiba Mbane (“Let’s hold hands together”) and raises the money for operation costs and finding food. This past year the economic crisis caught up with them, too, and by Dec. they had to forgo the annual Christmas party that Bobby throws for them. Thanks to a generous donation by Kelowna’s Gifts to Grandmother’s, their food budget is off to a good start for January and February, and Bobby will have the party in late March at the beginning of their school break.

One hundred finish up and make way for the next ones.