Soup – was there ever a more iconic comfort food, thick and rib-sticking? It’s a stereotype to think Africa is hot all the time. It’s not, especially in Sabie at 4000 feet elevation where the evenings have been cool to cold, even now as spring warms into summer. On Tuesday our volunteer administrator, Vicky Bryant, along with Myriam (see blog #2 – Catching Up) arrived well in advance of the gogos to chop onions, butternut, potatoes, leeks and tomatoes into a huge pot with a dried grain and bean mix, and simmer it all morning into a soup.

While the gogos had a hot meal of chicken stew, mealie porridge and veggies after their morning craft activities, Vicky and Myriam strong-armed the soup pot into the back of a bakkie (a small pick-up truck with canopy). I tagged along as they headed out into the underbelly of Simile township where “roads” are dirt tracks, wooden board shacks of 250 square feet accommodate extended families of six or more, and garbage waste is heaped along the roadside. From the tailgate they ladled soup into donated yogurt and cottage cheese containers, accompanied by bread slices. Over the next 15 minutes hungry people arrived, some with their own cups. I want to mention that this is not a Sitabogogo project, but something these two compassionate ladies have taken on of their own accord, and the soup costs are funded by Ubuntu Care Centre, the non-profit umbrella under which Sitabogogo operates. 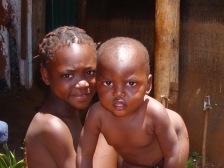 They also delivered soup to one family where the mother recently delivered twins by Caesarian and was sent home from the hospital the next day to four other children at home (and no father – not an unusual circumstance). When complications set in and mother and babies were back in hospital, plus the malnourished two year old, Vicky and Myriam took the family under wing and fed them daily. When we arrived three of the children were au naturel, bathing/playing in two little plastic tubs. Delightful, and clearly healthier and more bright-eyed after three months of Vicky and Myriam’s care. Next goal – to help their mother become self-sufficient.

On Wednesdays the gogos have soup provided for them by members of the Methodist Church. They are joined by disadvantaged members of the community who also come to fill their cups. One of the local mills shut down a year ago, putting 400 Simile residents out of work, who likely fed about two thousand bellies, so the need is great. A soup-er idea. 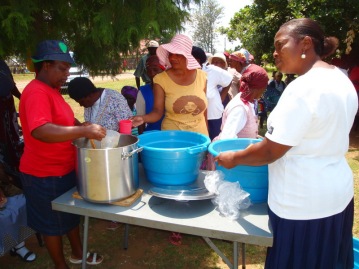 Wednesday Soup Kitchen for the gogos and others in need

One thought on “Susan’s Blog: Soup’s On”